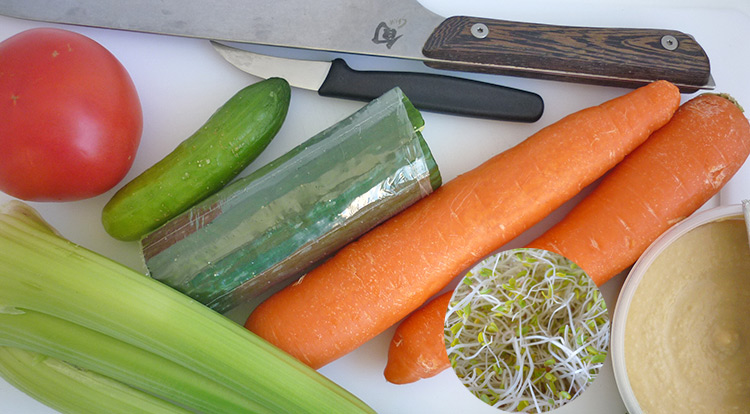 In order to attract your friends and stimulate their appetite, you can use this idea. Carving branches of celery stalk to curve and fill with other ingredients to make your plate interesting. It is a great idea to bring out your artistic talent on a plate.

In the beginning, you will need to decide the size of the plate for serving this dish. As such, you are able to measure the height of the celery tree. For instance, I decided to use a plate with 26 cm diameter. After that, get a full length of a celery stalk that is long enough to cross over the plate.

Cut off the top leaves of the celery to the segment. As such, use a chef knife to make a Julienne cut, but vary them to about four to ten cm lengths long without cutting through (see in picture-4) till the end of celery bottom.

I suggest using the chef knife to cut the main branches on the celery stalk. In addition, if you would like to make the main branch with more small branches, you are able to use the paring knife to process it.

When you are cutting a branch don’t cut through the bottom. As such, the bottom part will be the trunk of the celery tree. Therefore, you are able to design a fancy shape of it. It should be taller in the centre of the trunk and lower on the shoulders.

Create more details at the end of some small branches with a paring knife and make it have different length branches and thickness on both sides.

In fact, the celery stalk can be cut through its depth also to create more branches.

Consequently, cut more branches and carve its sub-branches to develop your celery tree with enough details for the next steps. In addition, don’t try to bend the fresh celery branches after you have carved them, as they are very fragile at this stage.

This is a very important step, we need to make the celery soft. However, we still need to keep it be fresh looking. Therefore, please don’t blanch it too long, and prepare the ice water in advance.

Prepare a big pot that is long enough to fit the full length of a celery stalk that you just curved. Then add water to the big pot, the water level should be just enough to cover the celery. Then heat the water till boiling and put your celery stalk into the pot for one second.

After that, get a big container with ice and water, and take the celery stalk out from the boiling water and put it into the ice water straight away to cool down for a couple of seconds.

Remove the celery stalk out from the ice water and dry it on the kitchen paper to prevent water on the plate.

After quickly blanching and chilling down the celery stalk, you should have crispy green celery branches. As such, put it on a plate to measure the final size. Cut an arc shape from the end of the celery stalk to match the curve of the plate.

The branches of the celery stalk should be softened enough to be bent by now. Turn two branches as a heart shape on the plate.

Then play with your artistic talent with the carved celery to create some nice curly shapes on your plate.

As such, create some big curly shapes on both sides of the celery tree and prepare for dipping sauce and four slices of pastrami to be able to fit into for the next steps.

If you like, you can carve some of the branches with more detail. As such, you can use the paring knife to cut it.

In this step, we are going to start decorating the celery tree. If you don’t have the ingredients shown, use whatever you have.

Firstly, remove the end of a baby cucumber. After that, cut two segments that are about 1.6 to 2 cm thick from the side of cucumber. Then use a paring knife to remove the centre flesh and seeds out from the cucumber.

Then cut in half to make two pieces. Do this so you have four pieces in total. After that, roll the cucumber skins in a spiral pattern. As such, you will have four curly cucumber coils.

Place these four curly cucumber pieces into the arc shapes of the celery branches, and make the spiral facing the centre of the trunk of celery tree on both sides.

5. Decoration with alfalfa sprouts and parsley

Garnish some details with alfalfa sprouts and parsley at the bottom of the celery tree.

In my design, the right-hand side has three curly spirals, but the left-hand side has two of them. I decided to decorate with some parsley to make it look balanced. Please make your own design.

6. Garnish with pastrami and dipping sauce

Any slice of ham, salami or pastrami is good to use at this step. I am using pastrami for an example. Take a slice of it, and cut it in four. Roll a quarter of the pastrami as a cone, and make the point of the cone to fit into the corner of the celery branches.

Rest the top of pastrami cone on a curly cucumber.

Remove one of the coiled cucumber pieces off temporarily from the curly celery branch. Choose a good thick dipping sauce to fill in that space. As the sauce is thick, it won’t float out from the curly celery space. Therefore, if you are able to have a small spoon to make the surface of dipping sauce smooth, it will look exquisite on the celery tree.

Then put the coiled cucumber back on the surface of dipping sauce.

According to the idea you have learned from this article, you are able to develop more details of food garnish by yourself now. Basic celery decoration is able to create lots of different branches patterns on your plate. Once you have done your celery tree, you are welcome to send us your photo of food decoration, we will publish it with your name on this blog. 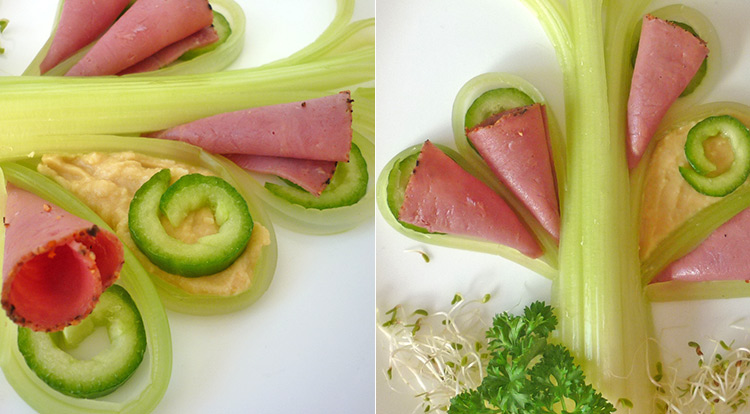 How to use a paring knife

What will you learn?
1. Understand three types of paring knife.
2. Different blade sha ...

You will learn an idea to carve a lollipop-shape from a carrot. Also, insert it into celery st ...

You will learn from this article:
1. Carving an easy carrot flower.
2. Create carrot f ...

From this article, you will learn
1.Dice shallots.
2. Remove calyx and seeds from baby ...

By continuing to use the site, you agree to the use of cookies. more information